IEEE Quantum Week 2022 -- the IEEE International Conference on Quantum Computing and Engineering (QCE) -- is bridging the gap between the science of quantum computing and the development of an industry surrounding it.QCE22 will be held as an in-person event with a virtual component in Broomfield, Colorado, USA. 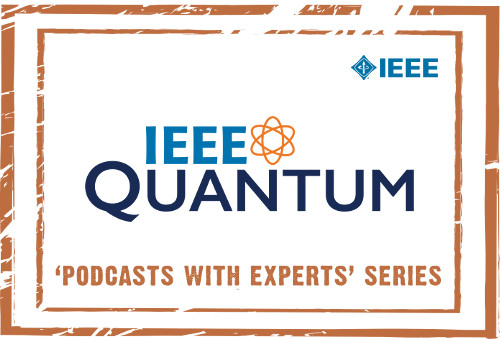 Episode 11: A Conversation with Pete Shadbolt

This episode of the IEEE Quantum Initiative podcast features Pete Shadbolt, Co-Founder and Chief Strategy Officer, PsiQuantum. Pete talks with us about the challenges and benefits of achieving a million qubit, fault tolerant quantum computing system.

IEEE Quantum Week 2021 -- the 2nd IEEE International Conference on Quantum Computing and Engineering (QCE) -- is bridging the gap between the science of quantum computing and the development of an industry surrounding it. Registration is now open. Reserve your virtual seat today!

Quantum Talks is a new online event that covers the latest in quantum computing research topics and related technical areas. This event is part of Quantum365 activities and is brought to you in conjunction with IEEE Hyderabad Section. Session recordings are available to subscribers of the IEEE Quantum Technical Community.

The technologies include big data, blockchain, 5G, and drones

Emerging technologies can help societies during global pandemics, but deployment and implementation must be carefully guided. In this article, thought leaders from IEEE Future Directions initiatives on Blockchain, Brain, Digital Reality, and Future Networks explore the societal aspects of utilizing emerging technologies to secure health and economic systems against future pandemics.

A summary and speaker presentations on the topics of quantum supremacy and quantum computer performance are now available from our half-day workshop on benchmarking quantum computational devices and systems. The workshop was held in conjunction with the 2019 IEEE International Conference on Rebooting Computing (ICRC) and was part of IEEE Rebooting Computing Week 2019.

The IEEE Quantum Initiative organized an educational summit on 6 November 2019 in San Mateo, California, USA, featuring speakers from industry and academia who shared prospects for advancing the field of quantum engineering and dealing with near- and long-term challenges, opportunities, and impacts. The Summit was held in conjunction with the 2019 IEEE International Conference on Rebooting Computing (ICRC) and was part of IEEE Rebooting Computing Week 2019.

The recent launch of the Micius quantum-enabled satellite heralds a major step forward for long-range quantum communication. Using single-photon discrete-variable quantum states, this exciting new development proves beyond any doubt that all of the quantum protocols previously deployed over limited ranges in terrestrial experiments can in fact be translated to global distances via the use of low-orbit satellites. In this paper we survey the imminent extension of space-based quantum communication to the continuous-variable regime-the quantum regime perhaps most closely related to classical wireless communications. The continuous variable regime offers the potential for increased communication performance, and represents the next major step forward for quantum communications and the development of the global quantum Internet.

The June 2019 issue of Computer examines what has been accomplished in quantum computing, ideas that have been demonstrated, and where the path to the future lies. Access articles from this issue below.

We explored the latest advancements in quantum technologies at the 2019 IEEE Quantum Meeting in Gaithersburg.

The IEEE Future Directions Committee has a long history of working with industry, academia and national laboratories to use its role as an impartial player to catalyze the development of important new technologies. The Committee brings together stakeholders for meetings in new areas of interest to the IEEE to determine where the Institute might make a contribution. Once the meeting has concluded, the Committee uses a summit output whitepaper to help it decide what technologies to incubate.

This whitepaper is the output of an IEEE Future Directions Quantum Computing Summit (QCS), held in Atlanta, GA, USA in August 2018. It was attended by 40 major players in quantum sciences from both the public and private sectors.

The summit chairs are Travis Humble and Erik DeBenedictis.

A new post-quantum cryptography microchip based on the open source RISC-V standard is highly efficient at generating randomness and other encryption techniques.

By using hexagonal quantum processors with fewer connections between qubits, IBM reports an exponential reduction in errors that will help them scale faster to much larger processors required to solve real-world problems.

Encryption needs random numbers, and the subatomic realm has plenty to spare

Randomness is a crucial ingredient in encryption, and with tech giants now utilizing quantum random number generator (QRNG) platforms and chips to secure their services, could the use of quantum randomness soon be standard practice?